The game has 100 levels that go through the story of the film, with the character Cinderella appearing alongside in different ages and dresses as the player progresses. Making matches of 6 or more connections make Wish Magic, which would break a line if it is included in another connection. Combining Wish Magic will break the same number of lines, and making a connection of 10 or more will make an upgraded Wish Magic that will break two lines at once when it is used in another connection. If the player makes a loop, it will also break all of the jewels inside. Making a match of 15 jewels or more makes a Magic Butterfly, which when the player connects it with a jewel, it will destroy all jewels of the same color.

The player can also use power-ups, such as to break one jewel without using a move, getting help from one of Cinderella's mice friends, or placing a Magic Butterfly on one of the jewels. A limited amount of each is available at first after completing the first level that they are introduced in, and the player can get more by reaching a certain number of courage pins, which are collected by completing levels and getting big scores, or by making in-app purchases, which cost real money. 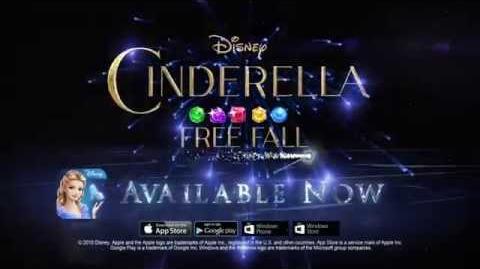