Presley and Kaia
Cynthia Ann "Cindy" Crawford is an American model, actress, and television personality. She made a guest appearance on Muppets Tonight in episode 10, appeared as Bibi Rockford in Wizards of Waverly Place, Gretchen Saunders in According to Jim, and herself in the 1994 The Walt Disney Company Presents the American Teacher Awards and the ABC TV show, Cougar Town.

Cindy in The Kermit the Frog Club.

Cindy with Andy and Randy Pig. 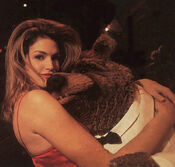 Cindy with Bobo the Bear.
Add a photo to this gallery
Retrieved from "https://disney.fandom.com/wiki/Cindy_Crawford?oldid=3945318"
Community content is available under CC-BY-SA unless otherwise noted.