1979-present
Cindy Morgan is an American actress, who, for Disney, played Lora Baines and Yori, in the 1982 film, Tron, and Laura Wells in The Return of the Shaggy Dog.

Morgan was born in Chicago, Illinois, to Polish and German parents. Morgan attended 12 years of Catholic school, then studied communications at Northern Illinois University, where she played records on the campus radio station.

After graduation, Morgan worked at a television station in Rockford, Illinois, where she reported on meteorological events and worked as a DJ for her local radio station. She moved to Los Angeles in 1978, and became the Irish Spring girl in various advertisements, while attending acting schools and workshops. Morgan landed her first screen role in the 1980 comedy Caddyshack, playing the role of sexy bombshell Lacey Underall. Her other film credits include The Midnight Hour, Galaxis, and Open Mic'rs. 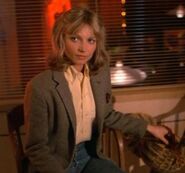 Lora Baines
(Tron, Tron Legacy, and Tron: The Next Day) 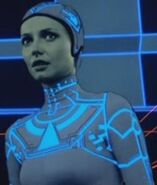