Weird things, dirty things
Claire is Julie Kane's best friend. She is from Detroit Deluxe, and is the only one who knows of Julie's double life. She was voiced by Dana Davis.

Claire is a sort of "valley-girl" who lives in Deluxe. She is used to living in luxury and is uncomfortable in the slums of Motorcity. As of her second appearance, she states Chuck is the least weird thing about the Burners.

Claire is a tall, pretty African American girl. She usually wears light purple eyeshadow and lipstick and has her hair, which is also highlighted purple, pinned up into an unusual square bun. She always wears the mandatory Kane Co. leotard but will try anything new from Kane Co., being very interested in fashion.

She first appeared asking Julie what she thought of Kane's important announcement, influencing Julie to find out what it is. Later, at the announcement, Kane captured the Burners, which Claire found shocking. 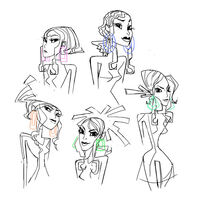 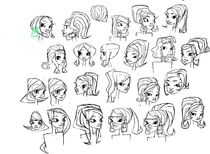 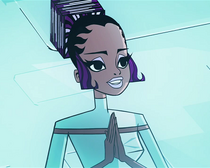 Retrieved from "https://disney.fandom.com/wiki/Claire_(Motorcity)?oldid=3275734"
Community content is available under CC-BY-SA unless otherwise noted.