Monsters University
Claire Wheeler is a character in Disney/Pixar's 2013 animated film, Monsters University. She serves as the president of the Greek Council. Claire is a Goth girl and has gray skin, with flippers on her feet. She has fin-like hair that is dyed purple, and wears a purple fur "skirt" and blue sweatshirt.

Claire Wheeler is the Greek Council president at Monsters University, and this year she is one of the chosen emcees for the school’s annual Scare Games. Don’t be fooled by Claire’s brooding exterior and monotone drawl—banal in appearance, on the inside she is a galvanizing force of school spirit who diligently warns the Scare Game participants of the dangers they will face.[1]

While Claire looks like a negative person in appearance and has a dingy approach, she is actually kind and has a good attitude toward Monsters University. In contrast to her friend, Brock Pearson, she is calm, collected and almost indifferent, rarely showing any emotion. This changes when Oozma Kappa win the Scare Games; she yells "They did it!" in delight, before hollering and throwing Brock to the ground in celebration. Her reaction suggests that she secretly supported them during their efforts to win the games.

Claire and Brock with Mike 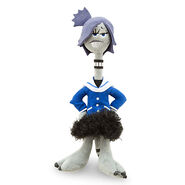