Clan DunBroch is a Scottish clan in Brave. It is the ruling clan of the kingdom of the same name, to which belongs King Fergus and his family, including Merida. Its symbol is the sword.

The emblem of The Kingdom of DunBroch is three bears disposed in a circle.

The tartan worn by the members of the clan is mainly colored in gray, dark turquoise, and scarlet.

Disney/Pixar has registered its pattern on the Scottish Register of Tartans, and gave the following information:

It should be noted however, that the tartan in the movie being made of a very coarse fabric, it doesn't have as much detail and color as the one officially registered. However, it matches the one John Lasseter, Mark Andrews and others wore for premieres of Brave.

Tapestry of the ruling family of the clan

The Kingdom of DunBroch's emblem, as represented on a pendant 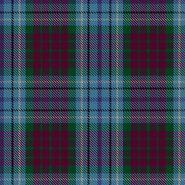