Princess of the Four Realms

To find the key that will save the Four Realms

Clara Stahlbaum[1] is the female protagonist of the 2018 movie The Nutcracker and the Four Realms.

She is based on Marie from the story The Nutcracker and the Mouse King by E. T. A. Hoffmann, and Clara from the ballet by Pyotr Ilyich Tchaikovsky.

Role in The The Nutcracker and the Four Realms

Clara is the 2nd child of 3, who was born into a very wealthy family. Unfortunately, her mother soon died at an age unknown, but it must've been long after she had left the 4 realms. While conversating on Christmas Eve, she is given a gift by her mother, which happens to be a golden egg locked with a Pentumbler's lock (A lock that cannot be opened without a specific key.)

Clara's father ordered her to not disappear off into the night, but disobeys him and send visits her Godfather Drosselmeyer, and helps him repair a set of music. She returns from his aid, after getting helpful advice and a bit of history about her Mother. However, her father is absolutely furious, and they have a short argue about Status, Clara's Mothe, as she storms off.

Soon, Drosselmeyer comes out of his basement home and comes out to tell all the children to find her gifts. Clara follows a golden string, in which loops around a Christmas tree and she is greeted by her younger brother Fritz, who's already found his gift. She laughs at his expense, before going up a grand staircase and down a dark red hall. The pattern of Owls on the wall soon turn into a pattern of Rats.

She follows the string into the hall, which soon turns into a log. She goes to the end of the log, in which she follows the line of string through a twisted thicket of white trees, in which she finds the key to the egg covered in a Christmas tree decorated with a golden blinding light. She reaches out for the key, but the key is soon snatched by a mouse. Angered, she chases the mouse in which it hops across a frozen river that she is unable to cross due to the risk of drowning.

Refusing to be bested by a small mouse, Clara instead attempts to cross the river by going on an old bridge, which she attempts to hop over the safety line. Doing this, she causes herself to awaken Phillip the Nutcracker, who then threatens her, asking her name. He constantly gets mixed up with her name, in which she has to explain that she is the daughter of Maria Stahlbaum. 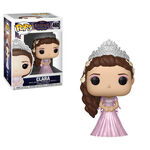 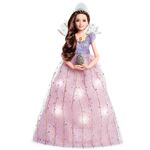 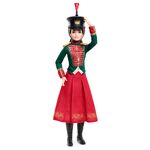 Retrieved from "https://disney.fandom.com/wiki/Clara_Stahlbaum?oldid=3361153"
Community content is available under CC-BY-SA unless otherwise noted.