When Drake Mallard/Darkwing Duck attends his high school reunion, he finds out Megavolt was a fellow student, and now he is out for revenge on Hamm String and Preena Lott, whom he blames for making him a demented villain (and losing his hair). His hit list also includes Darkwing Duck! Will Megavolt succeed in frying Hamm, Preena and D.W.? Will Darkwing Duck's reunion be his last? Will D.W. save Hamm and Preena—and expose his secret identity? 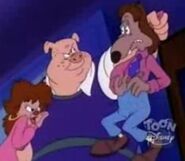