Christian was born in Glendale, California, the daughter of Hildegard (née Christian), who worked as the director of Giorgio Beverly Hills, and James Michael Coghlan. Her mother is from Germany and her father has Irish ancestry. Christian was raised in Connecticut and England.

Her earliest roles include television guest appearances on Dallas, Falcon Crest, Quantum Leap, Matlock, Murder, She Wrote, L.A. Law, and It's Garry Shandling's Show, and as a series regular on Berrenger's. She was best known for her role as Commander Susan Ivanova on the PTEN/TNT space opera series Babylon 5, from 1993 to 1998, as Captain Maynard on Fox's 9-1-1, and as the voice of Hera on the Netflix series Blood of Zeus.

Outside of acting, Christian authored books detailing her struggle with alcoholism and overcoming it as well as her experience with her career and fans. She made a documentary, One Little Pill, about the science behind The Sinclair Method and in 2013, founded the 501c3 non-profit C Three Foundation to educate medical professionals and people suffering from Alcohol Use Disorder about the success of TSM. 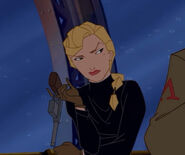 Helga Sinclair
(Atlantis: The Lost Empire)
Add a photo to this gallery
Retrieved from "https://disney.fandom.com/wiki/Claudia_Christian?oldid=4504851"
Community content is available under CC-BY-SA unless otherwise noted.