Disney Wiki
Register
Don't have an account?
Sign In
Advertisement
in: Article of the week, Characters, Villains,
and 20 more
English

Tarzan
Once Upon a Halloween

The Legend of Tarzan (cameos)

Money, hunting, poaching, firearms, fighting, getting what he wants

His plans being ruined, Jane's nagging, tomfoolery, embarrassment, delays, not getting what he wants

“Hiding, are we? Good! I could use a challenge, because after I get rid of you, rounding up your little ape family will be ALL TOO EASY!”
―Clayton sadistically taunting Tarzan

Clayton is the main antagonist of Disney's 1999 animated feature film, Tarzan. He initially serves as a protector for Jane and her father Archimedes Q. Porter on an expedition to Africa in search for gorillas, but his secret agenda is to use the trip as a way to hunt gorillas in order to sell them on the black market.

Initially, Clayton appears to be a chivalrous gentleman, albeit with a fragile temper and intolerance for treating the African expedition as a vacation experience rather than a business endeavor, as the Porters are often sidetracked by sights and wildlife other than the gorillas. He has also shown a hint of hatred toward animals and ignorance in terms of understanding them, believing gorillas to be savage beasts in spite of Professor Porter's hypothesis that gorillas are generally social creatures. This also ties to Clayton's slight paranoia of the jungle, as he is shown to be overly protective of himself, as well as trigger-happy, blasting his shotgun the second he suspects that an animal, other than a gorilla, may be nearby.

As time goes on throughout the film, Clayton's patience with the Porters wanes thin and with it, his true nature begins to unfold; one that is vicious, abusive, and conniving. By the time the climax comes forth, he is revealed to be a sinister individual who is planning to make wealth from selling gorillas. He also never shows any signs of cowardice; when he is cornered with his own shotgun, he is far from begging for his life and even mocks Tarzan to pull the trigger.

According to the audio commentary of the Tarzan DVD, Clayton's actions during his final moments in the film were meant to mirror the film's initial antagonist Sabor, thus symbolizing Clayton's increasing lack of humanity and descent into animalistic madness.

With the introduction of Tarzan to the Porters' expedition, Clayton makes several unsuccessful attempts to get information on the location of the gorillas from Tarzan, who is far more fascinated by what Jane has to teach him about humans.

Days later, a cargo ship arrives to pick up the explorers and take them back to England, much to their dismay. As the ship's crew loads up their luggage and supplies, Clayton and Jane try to reason with the captain and request more time, but the captain refuses because he doesn't wanna fall behind his schedule. Clayton subsequently blames Jane for distracting herself with teaching Tarzan, but Jane retorts that she is just as upset about not being able to find the gorillas. With both his and his employers' goals thwarted, Clayton prepares to leave Africa with Jane and Professor Porter until he witnesses Tarzan asking Jane to stay while presenting her flowers. Realizing Tarzan has strong feelings for Jane, he fools Tarzan into thinking they will stay if he took them to the gorillas. This is, of course, not true—Jane will have had to return to England at some point anyway. However, Tarzan is convinced and has Kerchak, the head gorilla, distracted, so he can lead Jane to the gorillas. Upon arrival, Clayton secretly forges a map to the troop's home. However, Kerchak returns unexpectedly and is furious upon seeing the trespassers and attacks Clayton after the hunter threatens one of the family during a skirmish.

Luckily for Clayton, Tarzan manages to pin down Kerchak. Kicked out of the family by Kerchak, a crestfallen Tarzan agrees to return to England with Jane and the professor. However, when they board the ship, they are unexpectedly ambushed by the crew who have also turned on the captain and his officers. As Jane and her father are taken to the ship's brig to be imprisoned, Tarzan tries to flee the thugs but is eventually captured by them. The scuffle ends when Clayton intervenes and fires his rifle. Tarzan is initially relieved to see him and begs for his help, but is soon shocked by Clayton's casual behavior toward the situation and realizes that he is the leader of the thugs. After striking an angry Tarzan in the chest with his rifle's handle, Clayton reveals to him his plan to capture the gorillas and sell them to a zoo for three hundred pounds each (a substantial amount of money in the days when the film was set). In order to further emotionally damage Tarzan's spirit, Clayton sadistically reminds him that only by his own unknowing efforts would he have succeeded and orders him to be imprisoned with the other captives. He and his henchmen then leave in a small boat loaded with large cages and make way for the gorilla's nests.

The thugs reach the nests at night and begin to capture the gorillas, netting them, forcing them into cages, and throwing the babies into burlap sacks. Kerchak tries to rescue his group, but is captured as well. Clayton slowly approaches the restrained gorilla leader and prepares to shoot him in revenge for getting attacked by him earlier, but is interrupted when he and his henchmen hear Tarzan's trademark yell. Tarzan and his friends, who have escaped imprisonment with the help of Terk and Tantor the Elephant ambush and frighten Clayton's henchmen (trapping some of them in the same cages they intended to trap the gorillas in), and free the gorillas, including Kala. Clayton is forced to take cover during the scuffle, but soon sets out to kill Tarzan for interfering in his plans.

From the undergrowth, Clayton shoots at Tarzan, but the bullet only grazes his arm. Kerchak, who has reconciled with Tarzan after he returned, is fatally shot when he charges at Clayton. After savagely knocking an intervening Jane aside with his shotgun, putting her out of the fight, Clayton confronts Tarzan and they take their battle to the treetops. They both briefly exchange blows and nature versus civilization, but nature wins when Tarzan makes Clayton drop his shotgun, which he grabs and points it at the hunter. Clayton teases Tarzan by telling him to shoot him and be a man, but Tarzan realizes that doing it will only turn him into a person like Clayton. In retaliation, he angrily presses the shotgun's muzzle against Clayton's neck and instead mimics a loud gunshot, shocking Clayton. Tarzan then retorts he is not - and will not be - a man like him and smashes it to pieces. After watching the pieces of his shotgun fall, Clayton flies into a rage and pulls out his machete. Tarzan jumps back to escape Clayton's furious swipes, then gets Clayton tangled up in a mass of vines. In a fit of rage and frustration, Clayton mindlessly slashes the vines one by one with his machete in an attempt to free himself, but does not notice one vine slip and coil like a noose around his neck. Seeing this, Tarzan warns Clayton to stop, but in his rage, the hunter does not heed to Tarzan's warning and accidentally hacks the final vine holding him up. This sends him and Tarzan plummeting to the ground; ironically, as he falls, Clayton finally notices the vine around his neck and, realizing what's coming, screams helplessly as he desperately tries in vain to disentangle it. While Tarzan lands safely, the vine runs out of slack and snaps Clayton's neck, killing him. Flashes of lightning briefly illuminating a tree behind Tarzan reveal the gruesome shadow of Clayton's hanged corpse swaying ever so slightly, the jungle having claimed him.

In The Legend of Tarzan episode "Tarzan and the Gauntlet of Vengeance", it is revealed that Clayton has a sister named Lady Waltham who planned revenge on Tarzan (whom she thought killed Clayton on purpose). Lady Waltham had her butler kidnap Jane, Professor Porter, Terk, and Tantor, hiding them in places all over the jungle with dangerous traps set to kill them. Before Tarzan could go to save them, Lady Waltham shot him with a dart, making Tarzan be poisoned, giving him a choice to suffer the way she did by having someone he loves die or suffer the way Clayton did and die.

However, after Tarzan saved her life, she gave him the antidote for the poison and finally understood that Tarzan never killed her brother.

In "Tarzan and the Race Against Time", after Tarzan was bitten by a venomous spider, Jane and the others learned that the only cure is the Mububu flower, found on the top of a waterfall. Terk began to feel jealous of Jane and thought that she was not suited for jungle life, so Terk made a bet that she could not make it. However, as Tarzan's condition worsened, Tarzan hallucinated Professor Porter as Clayton.

Descendants: Isle of the Lost

Clayton is one of Disney's villains to be brought back to life and imprisoned on the Isle of the Lost and he now has a son named Clay. 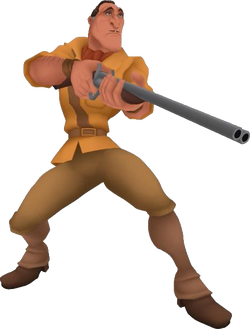 Clayton appears as a minor antagonist in the first installment of the series, residing in the world of Deep Jungle. His role in the game's storyline largely follows that of the original film.

Clayton finds Donald and Goofy in a bamboo thicket after they crash-landed in the world, taking them to the Encampment Site, where they reunited with Sora and met Tarzan and Jane. Suspicion over Clayton's activity arose when Clayton said that Donald and Goofy were "not much use for hunting gorillas" when he and Jane actually came there for research. He questioned Tarzan about the gorillas' nesting grounds, secretly desiring to hunt them down as they would fetch a great price at the zoos.

Eventually, Tarzan agreed to take him to the nesting grounds and met with the pack leader, Kerchak, while Clayton snuck to the abandoned tree house. There, he tried to shoot Terk but stopped when startled by Donald's squawking. To defend himself, Clayton lied that he shot at a snake threatening Terk's life.

Once back at the tent, a furious Jane reprimanded Clayton for his actions, forbidding him from going anywhere near the gorillas for the remainder of the trip. Furious, Clayton leaves the tent to lament to himself, but his anger and determination had unknowingly lured the Heartless to Deep Jungle. Frightened of them at first, Clayton took a shot at the Heartless, but the darkness in his heart took him over, and he realized he could use his new-found mastery over these "animals" to help him catch the gorillas.

While Tarzan, Sora, Donald, and Goofy were out looking for him, Clayton kidnapped Jane and Terk and imprisoned them in the jungle. He then hunted out the location of the gorillas, with the help of the Heartless. After a battle with Sora, Donald, Goofy, and Tarzan arrived, Clayton summoned a Heartless known as the Stealth Sneak, to assist him in defeating the heroes. Just as Clayton prepared to finish Sora off, the Stealth Sneak, having been defeated and dazed, fell and ultimately crushed Clayton to death.

In Hollow Bastion, Maleficent and her legion of villains discussed the presence of the Heartless in Deep Jungle due to Clayton's darkness, saying that his darkness was a bit too tasty to the Heartless for his own good, believing the hunter to have been weak-hearted.

The Disney Wiki has a collection of images and media related to Clayton.