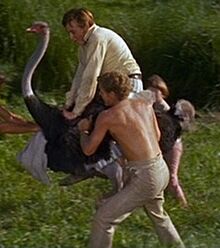 Clementine is an ostrich in Disney's 1960 movie, Swiss Family Robinson.

Francis Robinson tried to catch an ostrich, but after roping one by the tail, he ended up getting dragged face down through the ground. Nevertheless, his family was still able to catch, train, and name her Clementine.

On the day of the Robinsons' new holiday, Clementine is one of the animals who participate in the race, with Ernst riding her, along with Turk (ridden by Francis' monkey), Lightning the mule (ridden by Fritz), Rocky the elephant (ridden by Francis), and Duchess the zebra (ridden by Roberta).

In the end, after the pirates' deaths and as Ernst travels to England with Roberta's grandfather, Captain Moreland to continue his education there, Clementine can be seen running away along with Duchess, Duke, Turk, and Rocky as Francis tries to bring them back.