Clinton Coot is an anthropomorphic duck created by Don Rosa in 1993 for the story "Guardians of the Lost Library". He is the late great-grandfather of Donald Duck and the founder of the Junior Woodchucks.

Clinton Coot was the son of Cornelius Coot and an unnamed Indian woman. Inspired by his father's Woodchuck Militia, Clinton would create the Junior Woodchucks to inspire generations of young people to uphold ideals of protecting nature, knowledge and helping people and used the old Fort Duckburg as the organization's original meeting place.

Clinton Coot was fascinated with the stories of one of his ancestors, the great Duck explorer Don Dugo, and became a globetrotting adventurer archeologist to learn more about him and his partners, the Three Caballeros. After finding the entrance to their vault, he established the New Quackmore Institute with Baroness Von Sheldgoose, but his role was scrubbed out by her. When traveling in the Amazon, he discoverd the curious Aracuan Bird and gained possession of Xandra's atlas, which he was unable to open and kept on display as a prized possession in his library. Upon his passing, he bequeathed his museum collection and explorer's cabana with all its contents to his great-grandson, Donald Duck, and the other two direct descendants of the Three Caballeros, José Carioca and Panchito Pistoles.

He made his first appearance as Grandma Duck's unnamed father in Grandma's flashback in Walt Disney's Comics and Stories #161 (1954). Clinton Coot was first mentioned by name in Uncle Scrooge Adventures #27 in the story "Guardians of the Lost Library", first published in July, 1994. He made his first physical appearance in one panel of the story "W.H.A.D.A.L.O.T.T.A.J.A.R.G.O.N.", in a history segment about the Junior Woodchucks, identifying him as the founder of the organization. However, this contradicts an earlier story; "Right is Might" from Huey, Dewey and Louie Junior Woodchucks #1, published in 1966, mentioned Pioneer O'Duck as the founder of the Junior Woodchucks.

In A Little Something Special, it is mentioned that, during Grandma Duck's childhood, Clinton owned a small general store in Duckburg, called "Coot's Emporium".

Clinton later made another non-speaking appearance in one panel during a flashback to Grandma Duck's childhood in "The Best-seller".

In the "Donald Duck Family Tree" poster printed in Walt Disney's Comics and Stories #600, Clinton is married to Gertrude Gadwall and their two children are Grandma Duck (Elvira Coot) and Casey Coot.

Clinton makes his animated debut in Legend of the Three Caballeros. In the series, Donald Duck inherits Clinton's old adventurer cabana at the New Quackmore Institute of Art, Culture, and Science, a college that Coot helped establish. This inheritance is also split with Panchito Pistoles and José Carioca, who are direct descendants of the other two members of the Three Caballeros.

When exploring the number of artifacts in the old house, they unwittingly summon Xandra, the Goddess of Adventure and get pulled into a great conflict between good and evil, with the cabana becoming their headquarters. In "Mt. Fuji Whiz", Clinton appears as a ghost in the Underworld who helps the Caballeros when they are trapped in the Underworld.

A picture of Clinton Coot appears in the background of the episode Challenge of the Senior Junior Woodchucks!. Apparently still being part of the Junior Woodchuck's history.

Clinton in Legend of the Three Caballeros. 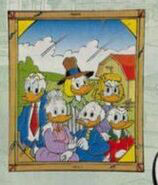 Family portrait showing Clinton with his wife Gertrude, his son Casey and his grandchildren Quackmore, Daphne and Eider. Published in the "Entenhausener des Monats" article about Grandma Duck in Micky Maus Magazin 46/2004. 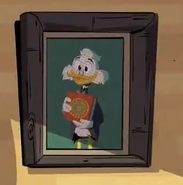 Retrieved from "https://disney.fandom.com/wiki/Clinton_Coot?oldid=4007076"
Community content is available under CC-BY-SA unless otherwise noted.