December 12, 2014
"Clogged" is the thirtieth episode of Mickey Mouse.

Minnie attempts to make a windmill work in order to save a flower in her garden.

The episode begins in The Netherlands with Minnie riding on her bike and singing about going clogging. She pops her hat off and takes her food with her. Minnie drops her food on the floor and gets shocked by a dead flower, but she helps revive the flower with her tears. The pink flower starts coughing and says it needs water. Minnie starts breathing in and blows (2 times) but gets dizzy. She uses this fan to try to fix the clog, but it doesn't work. Minnie tries fixing it with music, but it doesn't work either (at this point Minnie gets angry and breaks a stick). Minnie then gets a new idea, but it still doesn't work. Minnie starts falling on the ground, and the bike appears, but Minnie thinks she has a good idea. She bikes with her yellow shoes but it doesn't work, so Minnie puts her blue shoes on and starts biking. The pink flower asks Minnie that it needs more, so she puts on her giant red shoes and starts biking again, and the pink flower is fully revived. The bike goes faster and faster and faster, and the pink flower starts coughing, but Minnie takes her shoes off and thinks this was a stupid idea. The pink flower gets blown away by the wind, along with everybody's clothes. During the stronger winds (everybody closes their windows, but the house gets controlled by closing it all the away like a door), Minnie continues to take her shoes off, but she is stuck. The wind destroys the city, but Donald is trying to walk on the sidewalk, and the wind blows his wig. Minnie stops the strong wind and the windmill cracks and falls down. Minnie has an idea for her flower and starts singing again. The episode ends. 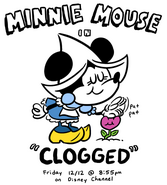