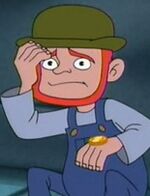 He was one of the magical creatures captured by the Huntsclan with Reggie, Silver, Bertha, and Jake[2]. As part of the "Flawed Group", Clooney is very unlucky, when leprechauns are known for their uncanny luck. When he calls tails on his coin toss, he gets heads, and when he calls heads, he gets tails. When his thumb gets hit, a swollen red bump appears. He is allergic to pollen which makes him sneeze. Storm clouds can happen a lot when Clooney is very unlucky.

Clooney was one of the guests at Jake's Halloween party[3].

The Disney Wiki has a collection of images and media related to Clooney.