Bryan Englund †
Morgan Englund
Adam Englund
Dinuh Englund
George Englund, Jr.
Cloris Leachman was an American television actress and comedian, who provided the voice of Gran Crood on the DreamWorks 2013 film, The Croods and its 2020 sequel, The Croods: A New Age (her final film role). She also played Aunt Louise Trends in Disney's Herbie Goes Bananas, Claire in The North Avenue Irregulars, Doc Betty in Miracle Child, and Nurse Spex in Sky High. A few of her other Non-Disney roles were as Griselda, the Witch in the 1987 movie Hansel and Gretel, Aunt Agnes in the 1998 animated holiday special, Annabel's Wish, both roles as Agatha and Sofia in the Olsen Twins movie Double, Double, Toil and Trouble, and the voice of Ganorga in Don Bluth's A Troll in Central Park.

Leachman also guest-starred in Episode 224 of The Muppet Show and played Maggie the zombie expert in My Boyfriend's Back. In addition, she appeared as one of the celebrities to pay tribute to Donald Duck on his 50th birthday, as seen in Donald Duck's 50th Birthday. She is also seen as Maw Maw on FOX sitcom series Raising Hope from 2010 to 2014.

In addition to her live-action Disney and Muppet roles, Leachman also provided the voices of pirate leader Dola in the 2003 Disney-produced English-language version of Studio Ghibli's Castle in the Sky, and as Yoshie in the 2009 English-dubbed version of the studio's Ponyo. She also voiced Heinz Doofenshmirtz's mother as well as Eliza M. Feyersied in Phineas and Ferb. She also played Mrs. Svorski in Girl Meets World, Helen Sullivan in You Again and Granny in Bad Santa. In addition, she voiced Hool in Seasons 2 and 3 of Elena of Avalor. 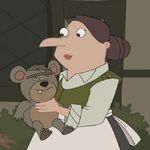 Cloris Leachman speaks at the peaks onstage at the Pioneers of Television panel at the 2012 Summer TCA Tour.