To be the best songwriter and DJ in Starland

Song writing, being the DJ

Purple Piphany Wish Blossom, Barette
Clover is one of the twelve Star Darling students at Starling Academy and also one of the supporting characters and protagonists in Disney's Star Darlings.

Clover has a lot of unique talent and one of them is making the best beats on her turntables. Clover is sweet and the ultimate team player. Clover loves writing songs and DJing, so she’s the perfect addition to feature in the Star Darlings’ band.

Clover is considered creative, especially when she’s making music. She is known to be loyal, patient, willpower, responsible, dependable, and contains great self-discipline.

However, on her bad side, she can be rigid and doesn’t like taking hard risks or challenges. She can be lonely to those she doesn’t know and isn‘t well-read. Sometimes Clover can be a wisecracker.

Clover’s theme color is violet. She is a teenage girl with light skin, violet eyes, lips, a thin slot between her front teeth, and hair braided into a backbun. Her outfit consists of a violet top hat, a jacket with a sparkly purple shirt underneath, violet skirt, leggings with star patterns, and fuchsia boots. Her accessories consists of her purple headphones and her star-charmed barrette.

On Earth, Clover’s appearance changes to look like a normal human. Her hair color changes to brown with only a streak of violet. Her skin loses its sparkle and her outfit changes to look more human. The only item that remains the same is her star-charmed barrette. 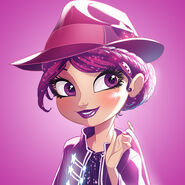 Retrieved from "https://disney.fandom.com/wiki/Clover_(Star_Darlings)?oldid=4322610"
Community content is available under CC-BY-SA unless otherwise noted.