When Eega Beeva recruited superheroes to find the Ultrapods before Emil Eagle and his Bad-7, there also were two civilians given new superhero identities for this mission. One of them was Gladstone who got the Cloverleaf costume (the other was Gus Goose).

Cloverleaf's first mission was to retrieve an Ultrapod from the Calisota desert before Pete. The press found about the face-off and went there along with some fans, to Cloverleaf's delight. Cloverleaf quickly overpowered Pete with his luck until he heard the fans cheering Pete as the loser gets more sympathy, so Cloverleaf lost on purpose to get fame. This actually gives him even worse press.

When Gladstone checks internet forums to see Cloverleaf's fame, he finds only negative comments, so he uses false usernames like "Gladstonus" and "Enotsdalg" to write positive comments until he's found out.

After Duckburg is safe, Gladstone returns to check the forums to find that Cloverleaf finally has one admirer. 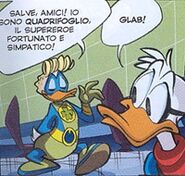 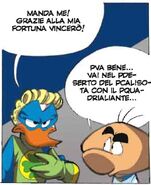 Add a photo to this gallery
Retrieved from "https://disney.fandom.com/wiki/Clover_Leaf?oldid=3626150"
Community content is available under CC-BY-SA unless otherwise noted.