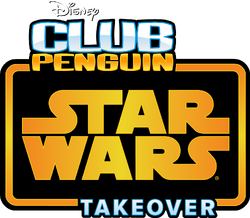 Club Penguin Star Wars Takeover was an event within Disney's children's MMO, Club Penguin. It began on July 25 and ended August 15, 2013. The event was initially announced in June 2013 on ClubPenguin.com, with StarWars.com posting an official cinematic trailer on their website in early July.[1]

The event features many characters from Club Penguin, donned in Star Wars-themed attire and personalities such as Princess Leia and Darth Vader. The event reenacts the occurrences of Star Wars: A New Hope.

THE THREAT OF DARTH HERBERT

It is a time of grave danger. DARTH HERBERT and the evil Empire threaten the island.

Join the rebel forces to battle Stormtroopers, steal the secret plans, and destroy the Death Star.

Without your help, destruction is certain.

Defeat the dark side and restore freedom to the galaxy...

Herbert returns to seek revenge for his defeat during Operation: Hot Sauce. He assumes the role of Darth Herbert, and recruits an army of stormtrooper penguins to make up the Galactic Empire. He builds a huge floating space station known as the Death Star, and makes plans to destroy Club Penguin Island with the Death Star superlaser.[1]

The island is in a code red alert as they discover the space station floating in the sky. The Rebel Alliance sends out a call for help to Club Penguin Island. Penguins work around the clock to build a landing pad for the Millennium Falcon at the dock, so that when it lands on July 25, penguins can blast into space to destroy the Death Star and save the galaxy.

Each week, penguins will travel to different parts of the galaxy and play a minigame to save the galaxy from Darth Herbert and the Galactic Empire.

, you must travel to the Rebel Base on Yavin 4 to do battle flying an X-Wing and receive a X-Wing Pilot Helmet.

Members can buy more than twenty costumes from the Star Wars Catalog.

In addition to this, members also have the chance to become Jedi Masters. To do this, you must equip Anakin's Lightsaber and duel with other penguins. Winning a battle will give you an item. Win thirty battles to unlock even more items!