Looking stupid in front of everyone

None
Clueless Morgan is a Muppet goat who first appeared as the tertiary antagonist in the 1996 film Muppet Treasure Island, along with fellow pirates Polly Lobster and Mad Monty.

Clueless is one of the principal mutineers as part of Long John Silver's plot to take over the Hispaniola. However, Clueless is the most naive of the group; as suggested by his name, he often seems unaware of the ramifications of his villainous deeds. He is a poor swordsman, striking his own allies and surrendering when the same pirate he hits is defeated. He is later beaten up by the other pirates when he believes they learned a valuable lesson when defeated.

Clueless Morgan was also featured in several UK Spots on Muppets Tonight with his Muppet Treasure Island co-star Polly. In these skits, the pair work as bartenders seen through the eyes of Mr. Callahan and Clueless displays his singing abilities. He has most recently appeared in the Muppet Snow White comic book as a bouncer at a nightclub alongside his old castmates Polly and Mad Monty.

Clueless Morgan appears as a Gulag 38B in Muppets Most Wanted.

According to Clueless Morgan's puppeteer Bill Barretta, part of the reason that Clueless has not been used in any productions since Muppets Tonight is that the puppet has gone missing. Barretta added to this comment, "If anyone out there has seen him, please ask him to call home. His family misses him."

Clueless Morgan and the rest of the pirates perform I'm a Little Pirate in Muppet Sing-Alongs: Muppet Treasure Island

A still snapshot of Clueless Morgan in a circle of a orange background for the closing credits of Muppet Sing-Alongs: Muppet Treasure Island 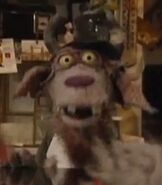 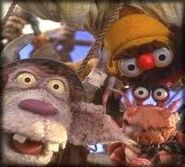 Clueless Morgan and other pirates

The Clueless puppet in development
Add a photo to this gallery
Retrieved from "https://disney.fandom.com/wiki/Clueless_Morgan?oldid=4420962"
Community content is available under CC-BY-SA unless otherwise noted.