"All right, nautre-lovers! Time for vittles!"
Clyde Flynn is a recurring character of Disney's television series Phineas and Ferb, voiced by Barry Bostwick. He lives in Danville's woods and hosts Camp Phineas and Ferb. He is not a very good bugler, but loves to sing and entertain the children. He often tells stories that he heard in his childhood like Bigfoot and Badbeard. He is not only a story teller, he is a color commentator as stated by Phineas for the roller rink commentary, but rather than adding "color" to the information, he actually said the names of different colors (Clyde: "Red, green, blue!" Phineas:"Excellent colors, grandpa"). He is the father of Linda Flynn and Tiana Webber. He's also the grandfather ofPhineas Flynn and Candace Flynn, and step-grandfather of Ferb Fletcher. 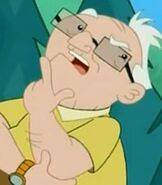 Retrieved from "https://disney.fandom.com/wiki/Clyde_Flynn?oldid=4236623"
Community content is available under CC-BY-SA unless otherwise noted.