Pepper Ann backing out of something
Coach Doogan is a recurring character from the animated TV Series Pepper Ann. She is the Hazelnut Middle School coach who is always in awe of Pepper Ann Pearson's abilities on the soccer field.

Coach Doogan is the PE teacher at Hazelnut Middle School who prior to doing so was apparently a nun as she repeatedly mentions having "left the convent". She heads the girls soccer team and has a huge amount of respect for Pepper Ann who is her star player. Unlike the other teachers who have a hard time managing her, Doogan is very accepting towards Pepper Ann and only has mild altercations with her. She apparently supports her more rebellious actions as she is also friends with Lydia and joined her Adamant Eve women's retreat with her; showing that she is a strong feminist. Her most infamous moment was in "In Support of" when she confused Pepper Ann by telling her to get support and accidentally convinced her to get a bra when she meant a partner.

In "The Finale", it is established that in the series' version of 2013, Doogan is still a teacher at the school, though she and the rest of the staff are disappointed in the fact that there is nothing significantly different about them after all these years.

Coach Doogan has a very confident, yet direct manner of speaking. She is also very opportunistic as she was very happy and willing to let Pepper Ann join the football team for notoriety's sake. On the whole, she is a very supportive person, but it is shown at times that she has a tendency to ignore glaring issues in order to achieve something of value. Just like with Lydia and Janie Diggety, it is heavily implied that she is a strong feminist and was happy to hear that Pepper Ann was enlightened enough to not have to worry about what other people think.

Coach Doogan is a woman of average height who has noticeably tan skin and short brown hair. She wears square-ish glasses and is usually seen in her coaching uniform even outside of work; consisting of light blue polo shirt with a pocket, a greyish-green skirt and white tennis shoes that have red poms in the back. 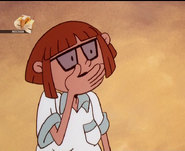 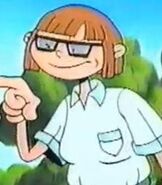