He owns a flamethrower of which he wants to play hopscotch with but the fire department does not approve. He also makes the students climb a rope while being hit with dodgeballs. He speaks with a British accent and wears glasses.

He is also the Coach of Norrisville's Jet Ski team, the "Wave Slayers".

He is possibly one of the most dangerous and insane teachers in Norrisville High. Despite that, he has a jolly attitude.

Coach Green is possibly one of the most dangerous and insane teachers in Norrisville High, wanting his kids to do things like play hopscotch with a flamethrower involved in "The Tale of the Golden Doctor's Note" and do blindfolded archery in "Sword Quest". He believes in learning by doing, so he sends his students on a three-legged race to the most dangerous places on the high school campus in "Randy Cunningham and the Sorcerer's Key". Despite his wackiness, he has a jolly attitude, always enthusiastic about what he's doing no matter how extreme it really is.

Coach Green is tall and lanky with golden-brown hair and hazel eyes. He usually wears glasses and a white sports jacket with yellow stripes and blue sides over a black shirt. He also has very short yellow shorts, long white socks with red stripes, and blue tennis shoes with yellow stripes. 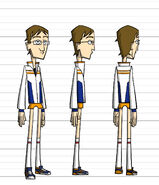 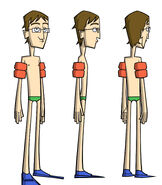