2006-present
Cody Allen Christian is an American film and TV actor.  He is well known for his role as Theo Raeken from on MTV drama series Teen Wolf. He also guest starred in shows such as Grey's Anatomy and Body of Proof.

For Disney, he had a recurring role as Mike Montgomery in the ABC/Freeform series Pretty Little Liars. He also guest-starred in Disney Channel/Disney XD shows such as Kavan in the Lab Rats episode "Crush, Chop and Burn" and Elliot in the Austin & Ally episode "Campers & Complications". 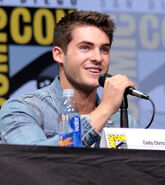 Retrieved from "https://disney.fandom.com/wiki/Cody_Christian?oldid=3716002"
Community content is available under CC-BY-SA unless otherwise noted.