Gabriel (son)
Coldfire (known as Desdemona in the production material) is an android possessed by a slain Gargoyle's soul. She is a minor character in Disney's Gargoyles.

Desdemona's brother led her mate to believe that she was having an affair with Goliath. Her mate attacked Goliath, throwing aside Desdemona. He battled Goliath until she was able to make him see the truth behind their jealous brother's lies.

In 994 CE, Desdemona was shattered with her clan by Hakon and his Viking marauders. A millennium later, her shattered remains were pieced together along with the remains of her mate and jealous brother to form the cyborg, Coldstone. Demona manipulated Coldstone into battling the Manhattan Clan, resulting in his being knocked into the Hudson River, rendering him temporarily inoperable.

When the Coldstone shell recovered, it followed the programing installed by David Xanatos and raided the Golden Cup. After breaking into the building, it began to download information from one of the computers. The computer, however, had a virus protecting it from unauthorized downloads. The virus caused the three souls, including Desdemona, to randomly take control of the shell. Goliath and Lexington used a virtual reality kit to enter the Coldstone psyche, wherein Goliath discovered Iago had merged with the Xanatos Program and become incredibly powerful. The virus, however, was swallowing pieces of the virtual world. Goliath, Othello, and Desdemona managed to defeat Iago, causing him to be absorbed by the virus, rendering him impotent in their shadow-world.

Because Iago was powerless in their world, Othello convinced his lover that the two could enjoy their measure of peace. This allowed Iago to gain control of the body when Demona and Macbeth stole the shell from the Manhattan Clan. Desdemona persuaded her lover that it is not the gargoyle way to stand idly by. The two confronted their evil soul-mate reclaiming control of the body.

Goliath sees an image of her in the episode "Shadows of the Past".

Coldstone made his way to the Himalaya Mountains, where he and Desdemona sought peace, learning from Master Dawa. Here, Goliath, Angela, Bronx, and Elisa encountered Coldstone, but could not convince him to return to the Manhattan clan.

It was in the Himalaya Mountains that David Xanatos managed to capture Coldstone and bring him back to Manhattan, where Puck segregated the souls of Coldstone, placing Desdemona into the body of Angela, Othello into Broadway, and Iago into Brooklyn all as a part of Alexander's first magical lesson. After convincing Iago that he would be better off in Xanatos' robot, Alexander placed his soul into Coldsteel, then put Desdemona in Coldfire and Othello back into Coldstone. But with Coldsteel seeking to wreak havoc, Coldstone and Coldfire elected to stop him, though they promised their clan that they would return once he was finally defeated. 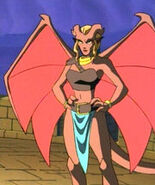