1993–2012; 2016–present
Cole Mitchell Sprouse is an Italian-born American actor, who is the twin brother of Dylan Sprouse. Together, they are collectively known as Dylan and Cole Sprouse or the Sprouse brothers, usually abbreviated as Sprouse Bros. Together, he and Dylan starred as Zack and Cody in Disney Channel's The Suite Life franchise. Cole is also well known for his role as Jughead Jones on The CW television series Riverdale.

Cody Martin
(The Suite Life franchise, That's So Raven, Wizards of Waverly Place, Hannah Montana, and I'm in the Band) 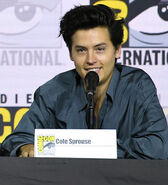 Cole Sprouse poses in the Press Room at the 2019 Peoples' Choice Awards.
Community content is available under CC-BY-SA unless otherwise noted.
Advertisement