Cooks a new Parisian bistro.
Colette Tatou is the lead female character from Disney/Pixar's 2007 film Ratatouille. She is voiced by Janeane Garofalo.

Colette Tatou is the only female cook in Chef Skinner's kitchen at Gusteau's Restaurant.

Colette is a capable cook, hard working and very tough to enter the masculine world of haute cuisine. She had defended Linguini from being fired as a garbage boy when Skinner caught him 'cooking' the soup in which Remy had made. She takes Linguini under her wing and teaches him the skills necessary to survive in the fast-paced kitchen. She was at first unaware of Luigini's admiration for her. Colette felt disgruntled when Skinner took a personal interest into Luigini, which in fact Skinner was trying to force the truth of Lingini's cooking.

The next day, she told a drunken Linguini that she thought he believed she was different, and stormed out when Linguini heeded her no attention. Linguini awakes, and was about to tell her the truth. Colette was initially puzzled by his actions and raving behavior, and slips a hand into her bag for a canister of mace. Remy desperately makes Linguini fall onto Colette to prevent him talking further and the two kiss. Colette was equally surprised as Linguini but quickly falls in love, dropping the mace. They rapidly blossom a romantic relationship.

Ego is successfully dealt with, and he requests to see the chef. Reluctantly she allows Remy to be unveiled as the true chef and Ego leaves, reformed. Later, Gusteau's was closed down to rats in the kitchen, but Colette is found cooking a new Parisian bistro, along with Linguini and Remy, with Ego as a patron and queues stretching around the block. 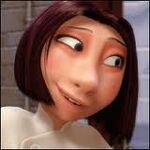 Add a photo to this gallery
Retrieved from "https://disney.fandom.com/wiki/Colette_Tatou?oldid=414380"
Community content is available under CC-BY-SA unless otherwise noted.
FandomShop DC Trivia GalaxyQuest