Will, Luca, and Matteo
Colin Andrew Firth, CBE is an English film, television, and theatre actor, who is well known for his roles as King George VI in the 2010 historical drama film, The King's Speech, which earned him the Academy Award, Golden Globe, BAFTA, and the Screen Actors Guild Award for Best Actor, amongst others. He is also known for his portrayal of Mr. Fitzwilliam Darcy in the 1995 British television adaptation of Jane Austen's Pride and Prejudice, and Harry Hart in the Kingsman film series.

For Disney, he voiced Fred in the 2009 animated film, A Christmas Carol. He also played William Weatherall Wilkins and a wolf in the 2018 film, Mary Poppins Returns, Colin Ware in Hope Springs, and Jess Clark in A Thousand Acres.

Colin Firth at his Hollywood Walk of Fame ceremony in January 2011. 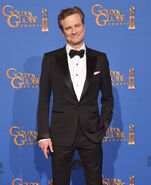 Colin Firth poses in the press room at the 72nd annual Golden Globes in January 2015. 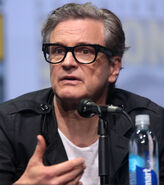 Colin Firth at premiere of Mary Poppins Returns in December 2018.