Hulk and the Agents of S.M.A.S.H.
Ultimate Spider-Man
Guardians of the Galaxy
What If...?

The Collector from Marvel Comics

“One down, five to go.”
―The Collector after keeping the Aether[src]

Taneleer Tivan (a.k.a. The Collector) is a Marvel Comics character who is an alien and an obsessive keeper of the largest collection of interstellar fauna, relics, and species in the galaxy, rivaling Brainiac from DC Comics. The Collector operates out of a place in space aptly named Knowhere.

Having got the Aether, the Collector hired Gamora, the adoptive daughter of Thanos to get the Orb for him. However, the Collector also hired the Broker, preventing a possible failure of Gamora. Gamora kept her promise and brought the gem just as she promised. Arriving at the Museum, Gamora and her partners were welcomed by the Collector's daughter, Carina, who is also his assistant. Carina guided them with her father. The Collector was fascinated when he saw Groot. He then asked Groot if he could dispose of his body at the moment of his death (this conversation was not completed because they were interrupted by Rocket).

The Collector told the story of the Infinity Stones and as ancient beings used them to destroy entire civilizations like wheat in a field. A tired Rocket asked him to stop and pay them at once, The Collector was preparing the pay when he saw that Carina had become tempted by the power and was approaching the gem. He asked her to get away, she instead decided to touch the stone, to steal it for herself and tried to use it in a desperate attempt to become powerful kill him and free herself from her duty as the assistant to the Collector, but to surprise the power of the Orb was too big and Carina died. Tivan was seriously injured after the explosion. a post-credits scene shows the Collector having survived the explosion and drinking with Howard the Duck.

The Collector appears as the main antagonist of "What If... T'Challa Became a Star-Lord?", as the greatest criminal kingpin in the universe, after he took Thanos's place during the power vacuum.

The Collector appears as the main antagonist of the Guardians of the Galaxy - Mission: BREAKOUT! attraction. Here he has managed to capture the Guardians and intends to keep them inside his collection under the pretense that he was giving them a tour of the new facility (the same tour he is giving to the park guests). In the context of the ride, he will appear to park guests to display his newest additions to the park guests, and informs them they are allowed to explore his archives at their leisure. However, Rocket is able to escape during the ride and free the other Guardians, foiling the Collector's plans.

A portrait of the Collector playing chess with his brother Grandmaster also appears in the attraction. 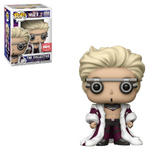