Having got the Aether, Tivan hired Gamora, the adoptive daughter of Thanos to get the Orb for him. However, Tivan also hired the Broker, preventing a possible failure of Gamora. Gamora kept her promise and brought the gem just as she promised. Arriving at the Museum, Gamora and her partners were welcomed by Tivan's assistant, Carina who guided them with her master. Tivan was fascinated when he saw Groot. He then asked Groot if he could dispose of his body at the moment of his death (This conversation was not completed because they were interrupted by Rocket).

Tivan told the story of the Infinity Stones and as ancient beings used them to destroy entire civilizations like wheat in a field. A tired Rocket asked him to stop and pay them at once, Tivan was preparing the pay when he saw that Carina was approaching to the gem. He asked her to get away, she instead decided to touch the stone in a desesperate attempt to free the Collector but the power of the Orb is too big and Carina dies. Tivan was seriously injured after the explosion. In a post-credits scene shows Tivan having survived the explosion and drink with Howard the Duck. 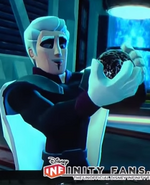 Retrieved from "https://disney.fandom.com/wiki/Collector?oldid=1696996"
Community content is available under CC-BY-SA unless otherwise noted.