Crop (whip)
Colonel Critchlow Sunchbench is a character from the defunct Adventurers Club restaurant which was found in Walt Disney World's Downtown Disney on Pleasure Island.

Colonel Critchlow Sunchbench is a British colonel who was a member of The Adventurers Club during the early 20th century. In the 1930s he served as the Club's Gleemeister. He was perched on a second floor balcony in the Club's Main Salon.

The Colonel is a cable-controlled puppet worked from behind the scenes. He is usually "on duty" (sitting dormant), but he wakes up to conduct certain Club activities. He aided in initiating new club members with the Club's official song, taught audince members silly songs, did various comedy routines, and interacted with the Club's staff and attendees.

Set during The Adventurers Club open house New Year's Eve party in 1937, the Colonel would initiate guests into the Club by teaching them the Adventurer's Song and singing it with them, sometimes in return for alcohol.

A photograph of the Colonel can be found in Trader Sam's Enchanted Tiki Bar near the Disneyland Hotel. Underneath the photo is a note to Sam from the Colonel reading, "Sam, remember that time in Burma? Good heavens, I think I need a G&T just thinking about it. Until the next time we two great explorers are paired...Kungaloosh! -Colonel Critchlow Sunchbench".

A letter from The Adventurer's Club president Pamelia Perkins can be found addressed to Sam which mentions the Colonel wishing to leave a ventriloquist dummy named Slappy in Sam's care. The Colonel used Slappy in some of his routines at The Adventures Club. The letter mentions the Colonel holding affection for the doll and wanting Sam to feed Slappy sandwiches. Slappy was actually a W. C. Fields ventriloquist dummy that could still be bought new in the 1980s.

Although Sam's intensions were good, Slappy somehow ended up in a crab/lobster trap mounted to the ceiling in the far left corner as you enter the bar.

A vinylmation figure of the Colonel is also hidden within the tiki-bar. 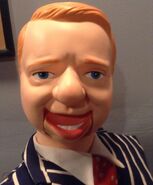