Barley’s antics, the idea of not being a good future parent to Ian and Barley

Runs off to patrol

"Working hard or hardly working?"
"You guys are in trouble big time!"
"I'm giving you to the count of three!"
Colt Bronco is a supporting character in the 2020 Disney/Pixar animated feature film, Onward. He is a centaur cop and Laurel's boyfriend.

Colt Bronco is an easygoing yet strict police officer. He is close to his girlfriend, Laurel Lightfoot, and rather awkward around her sons, Ian and Barley, considering Ian a good kid while having an exasperated opinion of Barley.

He cares about the boys in his own way but is not afraid to be a cop towards them.

After the events of the film, Colt loosens up a little and gets along better with the boys while also taking greater pride in himself as a centaur when he chooses to run on his own hooves rather than drive his police vehicle.

Colt Bronco is a centaur, meaning he has the body of a horse but at the horse body's neck is his head, arms, and torso. His human torso is overweight while his horse body is chestnut brown with a dark brown tail, and he wears a police uniform on his torso, along with his badge and radio and a hat that covers his brown hair, and he has a bushy mustache as well as horse ears.

At the end of the film, he removes his hat and reveals he has long hair that flies in the wind when he runs.

Colt first appears, coming over to the Lightfoot residence to visit Laurel but also reveal a video on his phone of Barley making a public disturbance in trying to prevent some construction workers from demolishing an old fountain.

He later hears from Laurel that night of the boys taking off because of a weird family issue and he drives out to look for them, finding the rear bumper and license plate of Barley's van, Guinevere driving off onto a road called the Path of Peril.

He catches up with the boys and orders them to get back in their van so he can escort them home, only for Ian to drive off. Colt radios for backup to pursue the boys only for a rockslide to bar them, allowing the Lightfoot brothers to get away.

He later arrives at the high school where a stone dragon, conjured from a curse, is rampaging. He watches as Corey, Laurel, and even Ian work together to vanquish it while Barley has a chance to see his late father, Wilden, one last time.

A short while later, Colt has loosened up and become closer to the boys while remaining close with Laurel. When he leaves to go on patrol, Laurel reminds him to not forget his keys, only for Colt to literally and figuratively let his hair down as he chooses to run instead of drive, galloping off to patrol. 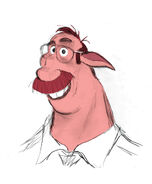 Retrieved from "https://disney.fandom.com/wiki/Colt_Bronco?oldid=3985379"
Community content is available under CC-BY-SA unless otherwise noted.