Disney Wiki
Register
Don't have an account?
Sign In
Advertisement
in: Characters, Phineas and Ferb characters, Teenagers,
and 10 more

Unknown
Coltrane[2] is a friend of Jeremy Johnson, and a recurring character in Phineas and Ferb. He is the bassist in his band, Jeremy and the Incidentals, and a love interest in Stacy Hirano. He, along with Jeremy and the band's unnamed drummer, performed at the Summer Festival, during which they were briefly transformed into a punk rock version of themselves by Dr. Doofenshmirtz's Ugly-inator. ("The Best Lazy Day Ever").

Coltrane was later seen watching Jeremy's TV commercial with him; he then changed the channel to see Candace on Phineas and Ferb's game show ("Let's Take a Quiz").

Coltrane is also an instructor at the "Summer Rocks!", a summer course that Baljeet was enrolled in ("The Baljeatles").

The two later formally introduced themselves to each othеr during the "Summer Rocks!" concert. They immediately show mutual attraction to each other, including dancing with each other during "Gimme a Grade" and holding hands afterwards. He also said he would teach her to play bass ("The Baljeatles"). They were later seen dancing together on New Year's Eve in "Happy New Year!", and in "Mandace", Coltrane actually states that Stacy is his girlfriend.

He is great friends with Jeremy Johnson. He may be like what Stacy is to Candace, a best friend. He is seen watching TV with Jeremy and talking with Jeremy during the "Summer rocks!" concert. He is also seen at Jeremy's party ("Let's Take a Quiz", "The Baljeatles", "De Plane! De Plane!).

Coltrane and Candace barely ever interact directly, with the exception of "Mandace", where Candace was in disguise as a pizza man and they hung out like they were the best of friends. Coltrane was having a belching contest with his friends and Candace was disgusted by that. Also, when Coltrane talked about his girlfriend, Candace cut him off. So, in short, Candace is pretty indifferent to Coltrane. 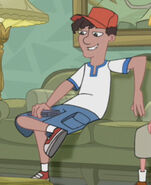