August 2, 2008
"Comet Kermillian" is an episode of the animated series Phineas and Ferb.

Phineas and Ferb carve pictures of their faces into a comet. Meanwhile, Candace tries to spend some time in the park with Jeremy, but her dreams were shattered when Jeremy's sister, Suzy is there as well. Meanwhile, Dr. Doofenshmirtz steals all the steaks from the Tri-State Area.

Candace is excited because Jeremy asked her to play croquet with him at the park. Lawrence tells them they are having a barbecue to watch Kermillian's Comet. Phineas and Ferb want to join in. Linda suggests that Candace bring Jeremy and she agrees. Phineas asks why it is called Kermillian's Comet. Lawrence says it was named after an ancient Danville astronomer called Augustus Kermillian, who discovered it. Linda tells them that it has said that "if you wish on a comet, your wish will come true." Phineas is amazed and he figures out what he wants to do.

Major Monogram tells Agent P that all the steaks in the Tri-State Area have disappeared. They suspect Doofenshmirtz and Perry makes his way to stop him. Lawrence comes into the living room and sees Major Monogram on the television. Major Monogram pretends he is part of a telethon trying to find a cure for antidisestablishmentarianism. Major Monogram quickly finds a way to leave, and the television goes black. Lawrence tells Linda that they "have found a cure for antidisestablishmentarianism" and they head off, Linda commenting that she "can finally take off this puce ribbon."

Candace is cycling to the park. She says hi to Jeremy and he tells her that his parents told him to look after Suzy for the afternoon. Candace starts to worry. She picks up a pie and asks if it is homemade. Jeremy said his mom made it and he goes to get plates out of the picnic basket so they can eat it. While he is gone, Suzy smacks a croquet ball at the bottom of the pie, causing it to hit Candace in the face. Jeremy comes back and asks what happened to her. He asks her to wait while he gets a towel. Suzy tells Candace that there is only room for one girl in Jeremy's life and "it is me!". Jeremy comes with the towel and Candace cleans herself. Jeremy goes to get a soda for Candace and while he is gone, Suzy offers Candace her soda, to which she obliviously agrees to take and gets blasted in the face with purple liquid. Jeremy tells Candace about some street performers, then notices she's wet and goes to get another towel.

Phineas and Ferb build an observatory to watch the comet. Isabella comes and Phineas tells her what they are doing. He says that they are putting on a laser light show and as a grand finale they will laser their faces into the comet so when it comes back they can show their grandchildren. Isabella says dreamily, "You had me at our grandchildren." Then she quickly realizes what she had said and says, "Steaks! You had me at steaks!".

Candace and Jeremy are going to watch the street performers. Jeremy goes to get snacks and says he will meet Candace over there. Meanwhile, Suzy yells at an elderly woman to get a nut from her. She hits the nut into Candace's jeans and the squirrels jump in to get them. The street performers see her and think she's dancing; they perform the song "Squirrels in My Pants" in response. The street performers are amazed when they find out she actually did have squirrels in her pants. One of them says, "We just got served." Dr Doofenshmirtz shows Agent P his new invention, "Steak Specs." He got the idea after Perry gave him a black eye. He plans on selling them in stores. He tells him that he stole all the steaks in the Tri-State Area and put them in his Steak Containment Unit (S.C.U.). Perry reveals a huge ray. Dr Doofenshmirtz says it is just there in case he wants to do something evil later.

Back at the park, Jeremy asks Candace if she wants him to get ice cream. Candace tells him she wants to get the ice cream. She goes to get the ice cream, but Suzy hits another croquet ball into Candace's path. She steps on it, loses control and falls into the ice cream cart. She rolls away in the cart down some stairs and keeps rolling. The street performers see her and "get served again." She continues to roll and runs over a mime. She continues to roll into a tree and squirrels fall on top of her and beat her up. She somehow changes clothes in the cart and you see the top of her standard dress. She goes back to Jeremy, dirty, but with an ice cream bar. Jeremy asks her what happened and she tells him about the horrible squirrels. Jeremy asks her to tell him what happened and Suzy introduces her to a squirrel. Candace and the squirrel scream and Candace run away.

In the backyard, everyone is there to see the comet. They go in and they watch a short movie, which Phineas also stars in and he tells everyone about the astronomer who discovered the comet. Candace comes back from the park, sees the observatory and tries to bust Phineas and Ferb. Phineas shows them the comet flying through space and they begin the laser sequence. The laser quickly draws their faces onto the comet. Candace comes in and tells them she is going to tell their mother.

Perry hacks into the system to destroy the ray. He flips Doofenshmirtz onto a red button that causes an overload and the ray begins to shoot things randomly. It shoots the observatory, which falls to the ground. Phineas tells everyone not to panic, but, just then, a huge piece of rock falls and almost crushes Phineas. He tells them, "okay, now you can panic," and everyone runs out. One more shot from the ray completely destroys the observatory. The ray then shoots the S.C.U. and it blows up, but Perry escapes before it does. Cooked steaks fly everywhere.

Linda and Lawrence get home and Candace tries to bust Phineas and Ferb. She asks them to look at it in their observatory and they go in the backyard, but the observatory is gone and only Phineas and his friends are there. Linda tells them that they couldn't find any steaks but they searched the entire city. They watch the comet and Linda wishes for steaks. The steaks that were cooked at Doofenshmirtz Evil Incorporated begin to fall from the sky. Everyone gets one and eats one. The street performers are also there and once again, they "get served" ("I'm kinda getting used to it!"). Jeremy comes to check on Candace. Perry lands on Phineas' plate (while a steak lands on Ferb's head) and Phineas says "Oh, there you are, Perry." Candace and Jeremy watch the comet and Jeremy asks if she made a wish. She says yes and he asks if it came true. She says it just did. Suzy prepares to hit Candace with a ball again, but a pile of steaks land on her. 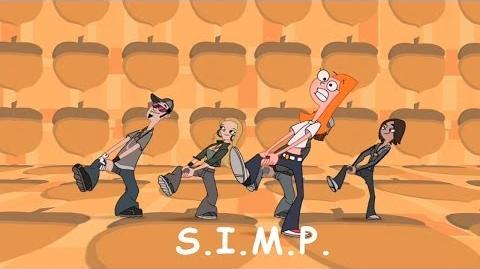