This article is about the character Cody from Star Wars. For other characters, see Cody.

Commander Cody (birth number CC-2224) is a clone marshal commander who fought alongside Jedi General Obi-Wan Kenobi and is the leader of the 212th Attack Battalion. He is also commander of the Third Systems Army, 7th Sky Corps, and Ghost Company.

Later in the Clone Wars, during the Battle of Utapau, Obi-Wan Kenobi and Cody lead the 212th Attack Battalion with the aim of capturing/destroying General Grievous. After Obi-Wan destroyed the General, Cody received Order 66 a transmission from Darth Sidious that triggered his inhibitor chip to turn on the Jedi and ordered a AT-TE to fire on Obi-Wan.

Cody was mentioned by Captain Rex, where he and Rex made up a bunch of protocols back in the Clone Wars which the Empire still uses. He was also mentioned, when Rex accidently called Kanan "Cody", when they were captured by Kalani and his droid army.

Commander Cody is the assist character for Obi-Wan Kenobi, available as a Unique card. 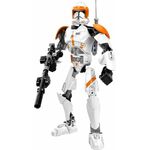