Serving Lord Hater, when his plans work, getting his way

Commander Peepers is Lord Hater's number one henchman and a major antagonist of the show Wander Over Yonder.

Peepers is Hater's second-in-command and leader of his army of Watchdogs.

What Peepers lacks in size, he makes up for in smarts and loyalty to his boss, Lord Hater, and determination to destroy the only threat to the Hater Empire, Wander, and Sylvia. He is recognized as the brains behind Lord Hater's reckless brawn, so much so that even the other villains recognize his absence when Lord Hater tries to go it alone. Peepers seems able to hold an impressive grudge, second only to Lord Hater's contempt of Wander. However, he seems to despise Wander and Sylvia primarily for acting as a constant distraction to the Hater Empire's plans to conquer the galaxy; constantly arguing with Lord Hater regarding their waste of time and resources trying to capture/destroy the two.

Peepers is both under-appreciated by the overlord and overworked. He is also very strict with his fellow Watchdogs, who are far less competent than he is. But despite their bickering, Lord Hater is Peepers' closest friend, and Peepers on occasion has been shown to grow extremely jealous when Lord Hater has brushed him off for his own attention from characters such as Lord Dominator. Though Peepers and Sylvia are enemies, they are often able to put their differences aside in order to help each other save Wander and Lord Hater from whatever trouble they may be in.

It's been suggested that he may have a Napoleon complex, as he's been teased by the likes of Emperor Awesome for being very small in stature and is elated when gifted with a pair of elevator shoes.

Peepers is a Watchdog, a creature with a large eye for a head with a red/purple iris. He has a lightning bolt mark on his black uniform and wears red gloves and shoes. Despite his resemblance to the common Watchdog, he outranks them by the pointed helmet on his head which the other Watchdogs lack, which gives him an aggressive look.

Peepers has pink skin beneath his uniform and is very physically fit for his size. 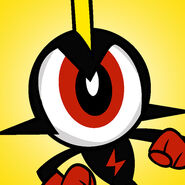 Peepers standing on Wander's back.

Peepers all tied up
Add a photo to this gallery

Retrieved from "https://disney.fandom.com/wiki/Commander_Peepers?oldid=4459228"
Community content is available under CC-BY-SA unless otherwise noted.