Start a Wiki
Connie Moreau is a hockey player from Minneapolis, Minnesota. She plays Forward position and wears number 18. She is the recurring, independent female team player of the Ducks and is extremely proud of it. She and teammate Guy Germaine have a relationship.

In the first movie, Averman refers to her as "the velvet hammer." She is the first to kindly welcome Coach Bombay to the group and asks if he plays hockey or skates nowadays, to which he coldly replies no. When the team invades Bombay's limo, she declares that she feels like Madonna sitting in it. She is close to Guy Germaine and is often shown holding hands with him, implying that they are dating. Later when the team is upset with Coach Bombay, Charlie is ostracized in class for sticking up for Bombay and the others start to push him around. Connie stands up for him and it leads to the entire team arguing amongst themselves, thus landing them in detention for 'quacking at the principal.' She suggested to Coach Bombay that Guy Germaine take the penalty shot against the Hawks before Bombay settles on Charlie to finish the game.

In D2, Connie is about to accept a kiss from Guy on a platform with a waterfall backdrop when Charlie skates in to tell them that "Quack attack is back!", thus making her excited and quickly joining the group to help round up the others. Like Charlie, she is fiercely loyal to the team and works hard to help them win. When the team was introduced to the new Ducks, she takes an interest in Luis Mendoza, commenting that he was a "good looking skater." This resulted in Guy Germaine elbowing Lester Averman in disgust for agreeing with Connie, indicating Guy Germaine's jealousy. She attempted to score a goal in the second match against Iceland but a bigger male player knocked her against the rink wall. When she regains control of the puck, it becomes wedged against the edge of the rink wall and Dwayne Robertson lassoes the Iceland player before he can crush Connie against the wall again. She thanks Dwayne for his act and states that "I'm no lady, I'm a duck!' before shoving the Iceland player to the ice. When the team wins over Iceland, she hugs Luis Mendoza, but in the credits she hold hands with Guy. Connie was part of the Team USA (Junior Goodwill Games). She later attended Eden Hall Academy, as seen in D3: The Mighty Ducks. She is portrayed by Marguerite Moreau.

Connie adds a feminine grace to the Ducks offense. She is an efficient skater and a good puck handler. Her more graceful skating maneuvers often throw off defenses, which enables her to weave around them. Despite her offensive prowess, her small size and weight make her vulnerable in defensive situations.

(When thanking Dwayne for roping the Iceland player) 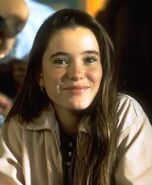 Add a photo to this gallery
Retrieved from "https://disney.fandom.com/wiki/Connie_Moreau?oldid=3884661"
Community content is available under CC-BY-SA unless otherwise noted.