Conrad Fleem is a major character in The Replacements. He is the mysterious owner of the Fleemco company.

"Reclusive owner of the mega-conglomerate Fleemco and mysterious benefactor to Riley and Todd. Some of his replacements seem like very strange choices, but is there a method to his madness?"[1]

Conrad processes Todd and Riley Daring's requests whenever they call him. He is usually seen in Fleemco's control room, sitting in a chair with the back facing the camera; his long mustache is visible from behind.

In most episodes, Conrad processes the siblings' orders without question. Sometimes he'll call the siblings out if they're being selfish, or if they're using his services to solve a problem they could have solved on their own. However, he isn't immune to letting his emotions cloud his judgment. In "The Frog Prince", Conrad states that he can't replace imaginary people. Then, after a vivid flashback of getting bullied for having a fake girlfriend, Conrad changes his mind.

At the end of the series it's revealed that Conrad is Riley and Todd's long lost uncle; the tip off is when they find out he craves sugar just like Riley and says "Don't judge me!" just like Todd. He had wanted to help his newly-orphaned niece and nephew, but he didn't know anything about parenting, so he sent Agent K and Dick Daring as replacement parents. Conrad opens up the replacement program to other kids, and he asks Riley and Todd to help him.

Conrad is a middle-aged man with short orange hair and a long mustache. He wears a suit consisting of a purple coat, a yellow shirt, a black necktie and purple pants.

Conrad wanting to offer the Replacements program to other kids.

Conrad revealing his identity to Todd and Riley

Conrad answering a call from Todd

Conrad in his office

Conrad calling Todd to tell him to stop replacing too many people in one day and that the Fleemco business is kept a secret, and if he replaces too many people, they'll find out that it was Todd and Riley making replacements.

Conrad asking Todd and Riley to test a rocket flight for safety.

Conrad as a mummy 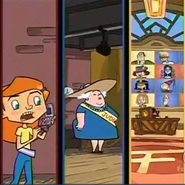