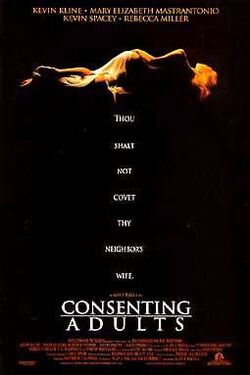 Consenting Adults is a 1992 American thriller film released by Hollywood Pictures. It was directed by Alan J. Pakula and stars Kevin Kline, Mary Elizabeth Mastrantonio, Kevin Spacey, and Rebecca Miller. The original music score was composed by Michael Small. The film's tagline is: "Thou shalt not covet thy neighbor's wife." This film has been remade in Bollywood as Ajnabee.

Composer Richard Parker and his wife Priscilla live an ordinary suburban life until they meet their new neighbors Eddy and Kay Otis. The two couples became friends. Kay's talent for blues singing gets Richard's attention, and Eddy is attracted to Priscilla.

It becomes clear that Eddy is an scam artist -- he fakes a neck injury after an auto accident for the insurance proceeds, the majority of which he offers to the Parkers as a gift. Eddy chastises Richard for not living dangerously, and suggests they swap mates for an evening.

The plot takes a nasty turn when Richard does sleep with Kay (supposedly without her realizing that he is not her husband) and Kay turns up bludgeoned to death with a baseball bat the next morning. Later it is revealed that Eddy spent the night elsewhere, to establish an airtight alibi. Richard's fingerprints are on the bat (the two couples having played a friendly game of softball earlier that day) and his semen is found in her body, so he is charged with the crime.

Insult is added to injury as Priscilla disowns and divorces Richard due to his infidelity. Eddy soon becomes Priscilla's lover and a substitute father to Richard's child.

A distraught Richard finally finds a ray of hope when he discovers that Kay is alive, recognizing her voice singing in a radio talent show. With the help of a private investigator hired by the insurance company from which Eddy is attempting to collect a $1.5 million indemnity claim, Richard tracks her down and learns the truth of how he was betrayed. Kay is guilt-ridden over her part in it, but terrified at Eddy's threat to implicate her if she testifies.

Eddy, anticipating what Richard intends to do next, murders Kay and slips away. Implicated in a second murder, Richard must now flee the scene as police sirens approach.

Priscilla discovers a forgotten plane ticket Eddy used on the night of the second murder. Now realizing Eddy's guilt, she worries over what to do about it. Richard performs a commando-style raid on Eddy's house, but Eddy, anticipating this move as well, reveals to Priscilla his plan to murder her and shoot Richard as a homicidal intruder.

Retrieved from "https://disney.fandom.com/wiki/Consenting_Adults?oldid=3988775"
Community content is available under CC-BY-SA unless otherwise noted.