D'Artagnan and serving the Queen

The King and Queen in danger
Constance is a minor character in Disney's 1993 movie, The Three Musketeers.

Constance is a lady-in-waiting and friend to Queen Anne. Queen Anne and Constance ride their horses with the royal bodyguards. D'Artagnan seeing them ride, defeats her traveling escorts by accident (believing them to be bandits), Constance is smitten by her "rescuer." After discovering that he wants to be a Musketeer, she coyly tells him that Musketeers and Royal ladies-in-waiting are not permitted to see each other and tells him that he will become a great Musketeer due to his bravery and fighting skills. Later, Constance is instrumental in rescuing D'Artagnan in his final duel with Rochefort by giving him back his sword. In the end, she is seen kissing D'Artagnan after he was finally made a Musketeer. 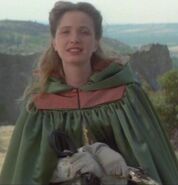 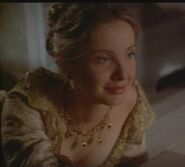 Constance with D'Artagnan after Rochefort's death 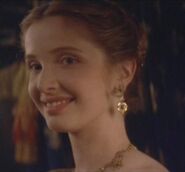 Retrieved from "https://disney.fandom.com/wiki/Constance?oldid=3341884"
Community content is available under CC-BY-SA unless otherwise noted.