“Till death do us part...”
―Constance Hatchaway

Constance Hatchaway is a character from The Haunted Mansion attraction. She is the current incarnation of the bride character in the attic and in a retcon, one of the figures depicted in the Stretching Room's portraits.

Constance Hatchaway was a beautiful woman born in Money County, California supposedly in the year 1851.[1] By 1869, an 18-year-old Constance had moved to Secret County, California where she became engaged to a young farming-heir named Ambrose Harper. Not long into their marriage, the teenage Constance murdered Ambrose with a hatchet via decapitation. Being Harper's wife, she inherited much of his estate while also keeping his severed head within a hatbox as a twisted souvenir.

The murder of Ambrose Harper was the first instance of Constance's modus operandi as a serial killer. Constance would target wealthy men and murder them with her hatchet before stuffing their heads inside of hatboxes as trophies. Through this habit, Constance would garner more and more wealth and status. An apparent affiliate of hers at some point in her criminal career was a man of unknown identity who came into possession of her hatboxes at some point in time.

Constance's next victim came in 1872 in the form of Frank Banks, an eastern banker, and community pillar. Two years later, Constance married the foreign diplomat and Chinese military officer the Marquis de Doome and in doing so presumably became the Marchioness de Doome herself. A year later she married celebrated railroad baron, gambler, and world-renowned gourmand, Reginald Caine. All of these husbands would fall to her blade and have their belongings and heads become part of Hatchaway's collection.

In 1877, the now 26-year-old Constance married one George Hightower of the wealthy Hightower family. By this time, Constance had left California and went on to move into a grand manor which George came into possession of. This manor (usually set in New Orleans, Louisiana, but upstate New York in Magic Kingdom continuity) was however haunted by many spirits and deemed, "The Haunted Mansion" by locals. Regardless, Constance used the mansion's attic to hide away her many incriminating belongings.

Not long after her marriage to George, Constance murdered him with an axe-blow to the skull and decapitated him for her collection later. Due to this matricide, Constance became the new owner of the Haunted Mansion where she developed the reputation of being, "The Black Widow Bride". George would be buried in the cemetery behind the manor where she defiled his tomb be plunging an axe into the scalp of a bust depicting him. Constance also would presumably have killed off her hatbox-carrying affiliate by this point with him going on to become a mysterious and prominent spirit known as The Hatbox Ghost.

Constance was never successfully persecuted for her many murders and lived in comfort off of her blood money. She died of unknown circumstances in 1927 at the age of 76. Following her death, Constance's ghost returned to the attic of the Haunted Mansion where she made a lair, surrounded by her many belongings from life. When unfortunate souls would wander into her domain, she'd make prey of them as-well.

The murderous bride was a concept dating back to some of Marc Davis' stretching portrait concepts, heavily inspired by the real-life ghost "The Lady of Raynham Hall". It would serve as inspiration when Disney Imagineers would revamp the Attic scene and its popular Bride character in 2006. Utilizing a similar projection effect to Madame Leota's, Constance would have a filmed body and a separate voice actress. Kat Cressida is the voice actress behind her whereas Julia Lee was the performance model for her.

Constance appears twice on the ride. She is seen in the Stretching Room in the elevator as an elderly black widowed bride looking straight at the guests who step back when the late Paul Frees' voice is heard as the Ghost Host. She sits on the tombstone that reads "Rest in Peace, Dear Beloved George" which is found in the cemetery.

She is seen in the Attic where the photo changes while guests see and listen to the silhouette of a pianist playing a ghostly version of the bridal march on the piano. Constance holds her ax in front of her heart while reciting her wedding vows in a menacing tone while staring at the guests. Portraits of her husband and mementos of their unions are littered throughout the room. As guests ride by, her husband's heads disappear from the portraits, signifying their unfortunate fates.

Constance is a rare character to encounter in the parks. She can usually be seen during the Halloween season, in parades and some meet and greet appearances. She can be seen on a float in the Frightfully Fun parade at Disneyland and Mickey's Boo to You Halloween Parade at the Magic Kingdom.

Constance's stretching-room portrait can be seen on a tarot card owned by the fortune-teller Esmeralda in Main Street, U.S.A.'s Penny Arcade in Disneyland.

Constance serves as the main antagonist of Muppets Haunted Mansion. Constance is first seen, meeting Pepe the King Prawn, and the two instantly hit it off. She wears him down until he agrees to marry her. After the ceremony, she'll kill him like all of her other husbands. Her plans are foiled when Gonzo swoops in and saves him. She's seen at the very end of the special, begging them to 'hurry back'. She was portrayed by Taraji P. Henson.

Constance appeared in a stop-motion animated Disney XD promo in 2016[2]. She met Pickle and Peanut, who quickly left when they thought she was acting weird.

Constance appeared in a Chibi Tiny Tales short on the Disney Channel's YouTube channel titled Molly's Haunted Mansion[3]. Molly McGee discussed wedding plans with her, before she scared her off. Scratch attempted to flirt with her, but the Hatbox Ghost interrupted him. At the end of the short, she and the rest of the mansion ghosts kicked them out.

The Black Widow portion of Constance's identity was interpreted as having been named Mary Gracey née Gilbert. In this version of the story, Mary was the unhappily married wife of George Gracey Sr. (George Hightower) and the mother of George Gracey Jr. (the composite character based on Master Gracey and the Ghost Host) who she sent away to boarding school for his entire youth so that she didn't have to deal with him. At some point in time, Mary learned that her husband was having an affair behind her back and that he had accidentally impregnated his mistress, which Mary used as an excuse to murder him via hatchet. Due to George's cheating, Mary was acquitted from her sentence and finally freed from her life of domestic servitude she took her portion of the Gracey fortune and fled the country.

The Bride portion of Constance's character in the Ghost Gallery is named Emily Gracey née Cavenaugh. Emily was the sole heir to the wealthy Cavenaugh family of Rhode Island and when she was 16, her parents died in a tragic carriage accident that left Emily with the entire family fortune. During her parents' funeral, the wealthy orphan became seduced and proposed to by George Gracey Jr. who wished to use her fortune to fund his obsession with the occult as he had depleted his own wealth. The night after her wedding to George, the young Emily wanted to play a game of hide-and-seek with her husband. Emily hid in the mansion's attic where she hid inside of a large chest only to be locked inside by her husband's jealous mistress, Madame Leota, causing the young girl to suffocate to death.

Constance is a supporting character and antagonist in Disney Kingdoms The Haunted Mansion, a five-part mini-series published by Marvel. She first appears in chapter 4, when the Captain forces Danny Crowe to go into the attic. She chases him around the attic, demanding that he marry her. At the end of the story, she decapitates the Captain and defeats him for good, lifting his curse. The story revealed that Constance killed her husbands, not out of greed, but because she liked weddings. She was prepared to marry a sixth husband in 1879, but it never took place.

Constance is referenced several times throughout the Tales from the Haunted Mansion book series. Amicus Arcane, the librarian, warns mortals not to go to the attic, or else she might get them. In the second book, Midnight at Madame Leota's, the main character wanders into the attic by accident, and she pursues him, looking for her next husband.

The Haunted Mansion: Frights of Fancy

Constance plays the role of the main antagonist in the IDW graphic novel Frights of Fancy. When Sydney comes to the mansion, she antagonizes her, making a bet that she can make the mansion scarier. One of the singing busts, Theodore, reveals that he was friends with one of Constance's many husbands.

Constance appears as a boss towards the end of The Haunted Mansion mini-game. While she is, once again, played by Kat Cressida and delivers her famous lines, her design was modeled after the classic attic bride, holding a candlestick instead of a hatchet.

Constance is the antagonist in the web game. The player character must guide the rest of the happy haunts away from her and rescue her five husbands.

Constance is an unlockable emoji in Disney Emoji Blitz, simply called "The Bride". Her power-up clears a row of emojis with her hatchet.

She appears as an event character in Disney Magic Kingdoms and is part of the Haunted Mansion collection. She is simply known as "The Bride".

She can be found in Minecraft's Walt Disney World DLC in its version of the Haunted Mansion. Her appearances mimic the real life attraction. 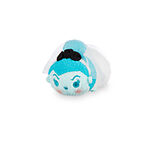 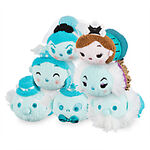 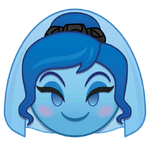 The Bride in Disney Magic Kingdoms'

Constance as she appears in the online game The Haunted Mansion: The Black Widow Bride

Constance Hatchaway as she appears in Kinect Disneyland Adventures.