Augusta and Ephraim
Constance Shulman is an American actress known for her current role as Yoga Jones in Orange Is the New Black.

She voiced Patti Mayonnaise in both the Nickelodeon and Disney versions of the TV series Doug and Doug's 1st Movie. She will voice an unknown character in Star vs. the Forces of Evil. 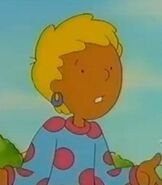 Patti Mayonnaise
Add a photo to this gallery
Retrieved from "https://disney.fandom.com/wiki/Constance_Shulman?oldid=2247276"
Community content is available under CC-BY-SA unless otherwise noted.