1 daughter
Constance Zimmer is an American actress known for her roles as Dana Gordon in Entourage and Claire Simms in Boston Legal.

For Disney, she played Rosalind Price in the third season of Marvel's Agents of S.H.I.E.L.D..

She also played Riot Girl in the Just Coffee? episode of the ABC TV Show, Ellen, Brianna in the ABC TV show, In Justice, Jeri Huntington in A Million Little Things, and Dr. Alana Cahill in Grey's Anatomy. 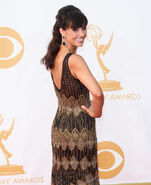 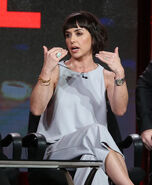 Constance Zimmer speaks at the Unreal panel at the 2016 Winter TCA Tour.

Constance Zimmer visits The Late Show with Stephen Colbert in February 2018.
Add a photo to this gallery
Retrieved from "https://disney.fandom.com/wiki/Constance_Zimmer?oldid=4104291"
Community content is available under CC-BY-SA unless otherwise noted.