Active
Construction Foreman Tom is a minor character in the 2009 Disney/Pixar animated feature film, Up.

Tom only makes a brief appearance throughout the film. When Carl cleans his dirty mailbox with his leaf blower, Tom greets him to know if he needs any help. When Carl says he does need help, he asks him to tell his boss and his other construction workers that they are taking down the site where his house is at. He then tries to persuade Carl to go to Shady Oaks Retirement Village so a shopping center can be built on his house's site in which he disagrees at first. Carl uses his megaphone to tell his boss not to take down his house in which he disagrees with him; he then asks Tom to ask his boss he can build a future shopping center on his house's site when he is gone. Tom and the other construction workers are later seen noticing and taking care of Steve who was injured by Carl. However, Carl manages to escape the construction site with his house and fly off to Paradise Falls. Tom and the rest of the construction workers are never seen again throughout the film.

Tom makes a cameo appearance in Day & Night as the lumberjack inside Day during a daytime scene. 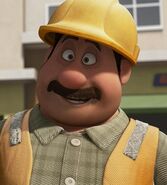 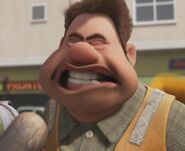 Retrieved from "https://disney.fandom.com/wiki/Construction_Foreman_Tom?oldid=4498792"
Community content is available under CC-BY-SA unless otherwise noted.