Convor (plural: Convorees) is a small species of owl-like bird native to several planets throughout the galaxy. It seemed to have an unknown strong connection with the Force.

A convor appeared in the conclusion of the episode "The Mystery of Chopper Base", when Ahsoka Tano says to Ezra Bridger that the Force becomes more mysterious as one learns more about it.

Another convor appears in "Twilight of the Apprentice" at the conclusion of Darth Vader and Ahsoka Tano, watching Darth Vader limp away from the destroyed Sith Temple on Malachor before flying away, which pans to the image of Ahsoka entering the ruined temple.

A third convor appears when Kanan Jarrus meets with the Bendu. As it perched happily atop the Bendu's spiky armor, it is likely that the bird is affiliated with this physical embodiment of the Force. 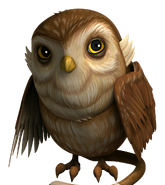