Corbin Bleu Reivers, better simply known as Corbin Bleu, is an American actor, singer-songwriter, model, dancer, and producer. He made his debut as Austin in the 2004 spy comedy Catch That Kid.

For Disney, he played Chad Danforth in the High School Musical franchise. He also played Izzy Daniels in Jump In!. Additionally, he guest-starred as Mercutio in the Freeform series The Fosters. His other Disney roles are listed below.

Corbin sang in High School Musical 1, 2, and 3, and recorded a song for his new movie Jump In!. His debut album, Another Side was released in May of 2007. 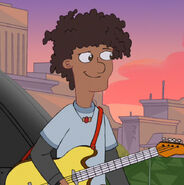 Cam Spinner
(Cars On The Road)

Corbin Bleu at the premiere of High School Musical 3 in October 2008.

Corbin Bleu and his wife, Sasha Clemons at the premiere of Descendants in July 2015.

Corbin Bleu speaks at the 37th annual College Television Awards in May 2016.