The Cornelius Coot statue first appeared in the Donald Duck comic Statuesque Spendthrifts (1952) by Carl Barks. Here, Scrooge and the rich Maharajah of Howduyustan compete at building the largest statue of Duckburg's founder, in an attempt to prove which of them is the richest. This results in Duckburg being filled with increasingly more gigantic statues of its founder. Barks re-used Coot's statue in Statues of Limitations (1957), and The Day Duckburg Got Dyed (1957). Coot's statues have since become an iconic aspect and recurring location in the stories, can be spotted in numerous comics taking place in Duckburg.

In a later story by Don Rosa, Cornelius was said to be the grandfather of Grandma Duck, which would make him Donald Duck's great-great-grandfather. However, Coot was not related to Donald in Barks' original stories.

Cornelius first appeared in person in a flashback in the Italian Disney comic Paperino e la "graande impresa", first published in 1988, in which he looked similar to Donald. The story revealed how Coot helped George Washington getting the fabric used as tablecloth when signing the Declaration of Independence; this heroic tale is represented by Coot's statue in this story, which shows Coot bearing a roll of fabric instead of the usual corncobs.

A year later, Don Rosa used Cornelius in His Majesty, McDuck, telling the story of how Cornelius became the owner of Fort Duckburg. In a flashback, we learn that, during Cornelius's stay in Fort Drake Borough (named after Sir Francis Drake), it was attacked by Spanish soldiers. When the British were incapable of defending the fort, the commander made a deal with Cornelius: the fort would pass to his property so the British wouldn't be responsible if the Spanish took it. Cornelius agreed, and then popped some corn to make it sound like shots, which made the Spanish troops run away. Cornelius renamed the fort "Fort Duckburg" and turned it into a trading camp for hunters. Several people began to settle down and form families, and Cornelius himself started a farm of his own. A village was formed in Duckburg, with Cornelius as the leader.

As seen in Last Sled to Dawson, Cornelius' grandson Casey Coot was a fellow prospector of Scrooge McDuck during Scrooge's gold rush days. However, unlike Scrooge, Casey was not successful and sold his grandfather's land to Scrooge, so that he could pay a train ticket back to Duckburg. Years later, Scrooge built his Money Bin on this land.

Cornelius has a great-granddaughter called Cornelia Coot, who visited Duckburg in The Fabulous Fixer.

The Incredible Quest for Cooties (Donald Duck #378) shows the story of how Cornelius and his brother Johannes left their home country, the Netherlands, in the late 1600s, on a voyage to start a new colony. Cornelius sailed West on his ship, Ye Quackflower (a reference to the Mayflower) and Johannes sailed East on his ship, Ye Duckwell (a reference to the Speedwell). Two years later, Cornelius arrived in the New World and founded Duckburg there, while Johannes was never heard of again. The story later reveals that his ship was attacked by pirates and only few crew members escaped, excluding Johannes.

In modern times, Duckburg has many statues of Cornelius Coot holding corn. It can be seen in several comic stories, and also had a cameo in the DuckTales episode "Ducks on the Lam". A real-life version of the statue was also built for Mickey's Starland (which was set in Duckburg) and was still retained when the area became Mickey's Toontown Fair. The Toontown version included the following legend:

This Is Old Cornelius Coot
Who Turned His Corn Crop Into Loot
And Founded Mickey's Toontown Fair
To Him We Dedicate This Square. 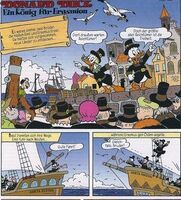 Cornelius (left) and Johannes (right) in The Incredible Quest for Cooties.

The Cornelius Coot statue that used to be at Mickey's Toontown Fair. 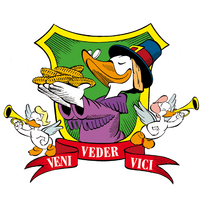 Cornelius appears in the logo of Duckburg's newspaper.

Retrieved from "https://disney.fandom.com/wiki/Cornelius_Coot?oldid=4293417"
Community content is available under CC-BY-SA unless otherwise noted.