Disney Wiki
Register
Don't have an account?
Sign In
Advertisement
in: Characters, Jake and the Never Land Pirates characters, Creatures,
and 8 more

Freedom, playing around with Izzy, her seashell necklace

Active
Cornica is a sea unicorn from Jake and the Never Land Pirates. She appeared in the episode "Izzy and the Sea-Unicorn".

Cornica met up with Izzy while she was sitting at the water's edge. She quickly bonded with Izzy and gave her a seashell to summon her. In return, Izzy gave Cornica a seashell necklace as a token of their friendship.

When Captain Hook captured Cornica, Izzy set off for Mermaid Lagoon to ask if anyone had seen the sea unicorn. However, Queen Coralie and her subjects discounted it, since sea unicorns are but legends in mermaid lore. Stormy was the only one who believed Izzy's story and helped the young pirates find where Hook had taken Cornica.

Jake and his crew pursued Hook in their min-subs to Coral Tunnel, wherein lay the legendary treasure of the sea unicorns. Hook caused a cave-in to try and stop Jake from following, but Jake and friends managed to bypass the cave-in. 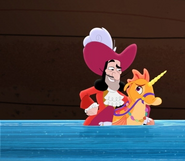