Disney Wiki
Register
Don't have an account?
Sign In
Advertisement
in: Article of the week, Locations, Kingdoms,
and 6 more

Tangled Ever After
Chibi Tiny Tales

“Well, centuries pass, and a hop skip and a bump right away, there grew a kingdom. The kingdom was ruled by a beloved King and Queen”
―Eugene's narration

Corona is an island kingdom and the birthplace of Rapunzel in Disney's 2010 animated feature film, Tangled and the subsequent TV series.

The central hub of Corona's kingdom was built on an island somewhere in Europe and grew over many years. The oldest known of Corona's line of monarchs is King Herz Der Sonne. During his reign, Corona was in a bitter war with their rival kingdom, Saporia. Under King Der Sonne's rule, a complex tunnel system was built beneath Corona to safely move the kingdom's knights and supplies wherever King Der Sonne needed. A detailed map of the tunnels and their secrets were recorded in a journal, by Der Sonne.

At one point, Corona was invaded by Der Sonne's sworn enemy, the ruthless General Shampanier. As her minions ravaged the kingdom, Shampanier made it to Corona Castle, where she battled Der Sonne personally. In the midst of their battle, Shampanier finds that the final pages of Der Sonne's journal contained a profession of his love, intended for her. The feelings were mutual, and the two declared their love. They were later married, and with their union brought peace between their two lands.

Centuries after King Der Sonne's reign, Corona was ruled by Queen Arianna's father. Eventually, Arianna became Queen married Frederic who became King. During her pregnancy, Arianna became gravely ill, forcing the citizens of the kingdom to search for a fabled magic, golden flower with healing abilities. Once it was retrieved, the flower was given to Arianna, and its power saved both the queen and her daughter, named Rapunzel. Due to the flower's powers, Rapunzel was born with golden hair that also had the ability to heal the sick and injured. Because of this, a woman named Mother Gothel - who had previously hoarded the flower's power for hundreds of years to keep herself young - broke into the castle, stole Rapunzel, and hid her deep within the forest outside of Corona's reach. Rapunzel was then raised as Gothel's daughter, and her power to heal was hoarded by the witch once more. To ensure she never lost the flower's magic again, Gothel forbade Rapunzel from ever leaving the tower.

Seventeen years after her kidnapping—on the eve of her eighteenth birthday—Rapunzel met a notorious thief named Flynn Rider. With his help, she managed to escape Mother Gothel, return to Corona, and reunite with her biological parents. Rapunzel then resumes her rightful place as princess and heir to Corona's throne.

The map of Corona 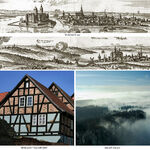 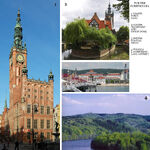 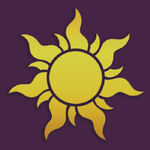 Corona in Tangled: The Series

Corona ruined by the Black Rocks

Old Corona in the aftermath of the battle