David Kaye (Guardians of the Galaxy)
Fred Tatasciore (What If...?)

“I thought you were a formidable machine. But you'll still die the same as any man.”
―Corvus Glaive to Vision[src]

Corvus Glaive is a Marvel Comics character who appears as one of the antagonists of Avengers: Infinity War and Avengers: Endgame.

Corvus Glaive is one of Thanos' feared members of the Black Order. His life force is bound to his glaive, therefore breaking it will kill him.

Corvus Glaive first appeared in the Season 2 two-part episode "New Frontiers", as a member of the Black Order. He and the other members infiltrate a special prison, where they end up taking out its defences, and free their master Thanos. When the Korbinite Jeter Kan Too of New Korbin begs the Avengers to save them from mysterious invaders, the team discovers that Thanos and his Black Order are plundering New Korbin.

His second appearance was in the other half of the episode "Avengers World", in which the Black Order attack Earth, finally planning to take over the planet by destroying the Avengers.

In this film, Corvus Glaive accompanies his father, Thanos on the Statesman, where his father gains the Infinity Stone and brutally kills Loki. He and his wife, Proxima Midnight, went to Europe and entered a fight with Wanda Maximoff and her boyfriend, Vision to retrieve the Mind Stone. However, they were quickly defeated by Captain America, Falcon, and Black Widow, who had wounded Corvus. Proxima and her husband then retreated back to the Ship.

During the Battle of Wakanda, Glaive attempted to attack Vision after defeating Ayo, Shuri, and two of their guards. However, he was killed by Vision, who killed Glaive with his own spear. 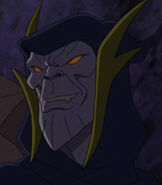 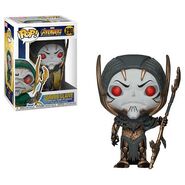 "But sire, our troopers!"