The Dragon Council
Councilor Kukulkhan[1] is a minor character from the animated television series American Dragon: Jake Long. He is a member of the Dragon Council, and a former World Dragon.

He was formerly the Central American Dragon. His dragon form resembles a large orange dragon. He has tan antlers on his head and red earrings on his ears. His mane is green and his underbelly is yellow. However, unlike most dragons, he has feather wings instead of leather wings. As such, his skeletal anatomy differs greatly from other dragons where, rather than having bones throughout the wing in a finger format, he can only control the bones at the rim of his wings. This makes for lesser maneuverability and a more bird-like anatomy. The outside of his wings match the color of his scales, but the inside of his wings are a darker tan. At the fold of his wing, he has a fluff of fur. 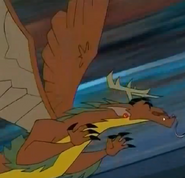 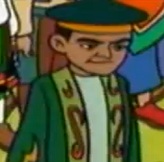